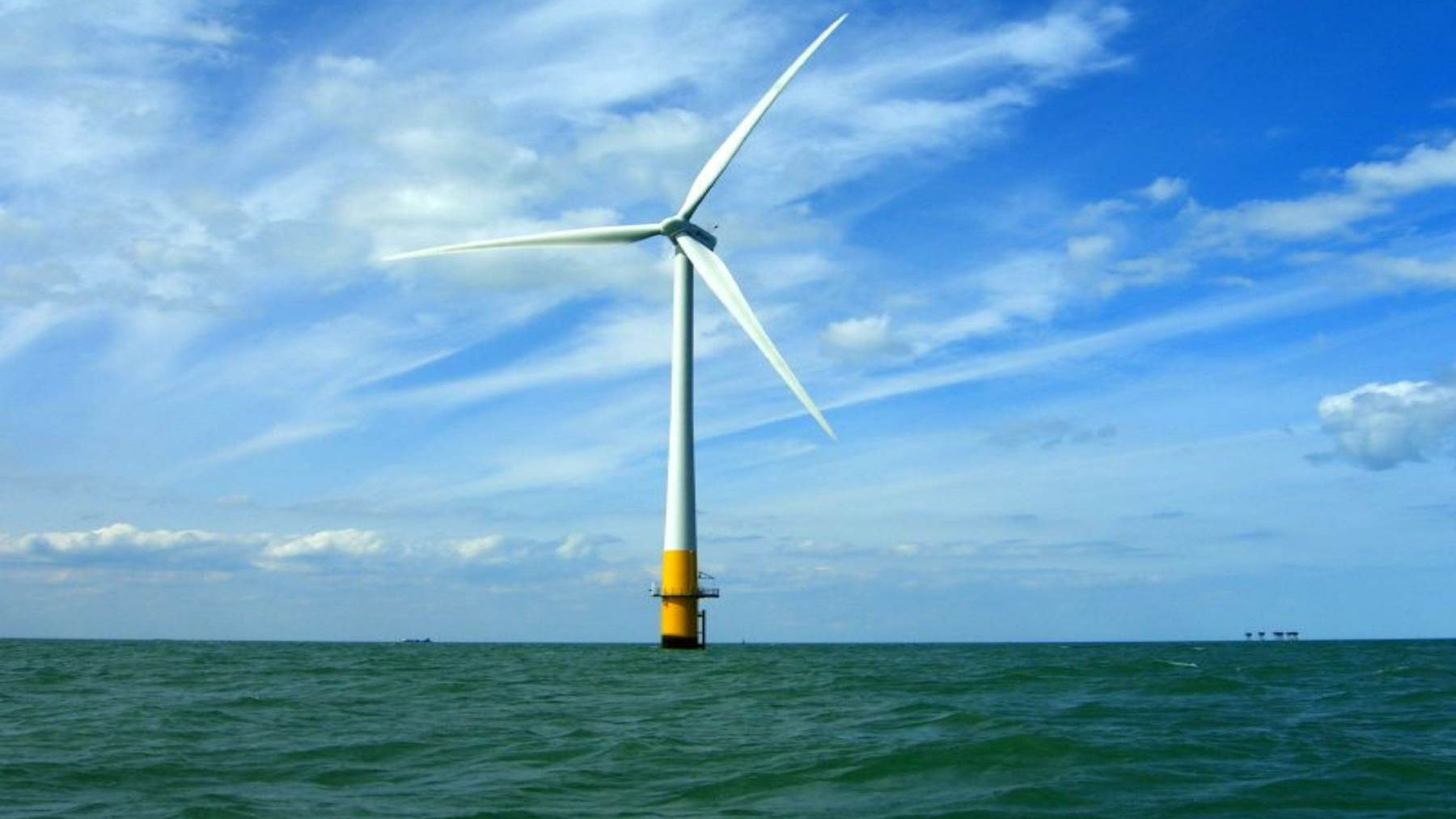 The government is seeking ways to minimise the cost of hitting the renewable targets within the £7.6 billion budget set out in the Levy Control Framework (LCF) and effectively puts a price on CO2 emissions.

The LCF controls the maximum costs that can be added to electricity bills for renewables.

The government is seeking ways to minimise the cost of hitting the renewable targets within the £7.6 billion budget set out in the Levy Control Framework (LCF) and effectively puts a price on CO2 emissions.

The LCF controls the maximum costs that can be added to electricity bills for renewables. Across all technologies there are more potential projects than required to hit the renewables targets and there is increasing political pressure from consumers whose bills are rising, as well as from industry who are concerned about losing competitiveness against countries with low energy costs.

The EU is encouraging member states to use competition to allocate renewables budgets, and drive down the cost of hitting the emissions targets set for 2020, 2030 and 2050.

To compete or not to compete?

Some technologies need shielding from competition, and there is a debate between Britain and the EU over whether this should be on the basis of the level of ‘deployment’ or how ‘established’ these technologies are. In fact the key features which require a technology to be shielded from competition are more subtle.

Several technologies clearly need to be protected from full competition as they are relatively early stage and require significant research and development; these include wave, tidal stream, and advanced conversion technologies (gasification and pyrolysis).

Other technologies are mature, competitive; have no further material cost reduction potential and could be subjected to full competition from the outset. These include onshore wind, energy from waste with CHP, hydro, landfill gas and sewage gas.

However, there are two technologies which don’t neatly fit into these two categories: offshore wind and solar PV.

Both offshore wind and solar PV have the potential to get costs down significantly, and both industries are aiming for contract for difference (CfD) strike prices below £100/MWh by 2020. Domestic & commercial scale roof feed-in tariff (FiT) rates are also automatically degressed and will be less than £100/MWh by 2020. Solar has a long track record of disrupting policy regimes, and scuppering government departments that tend to pick winners. It will continue to do so. 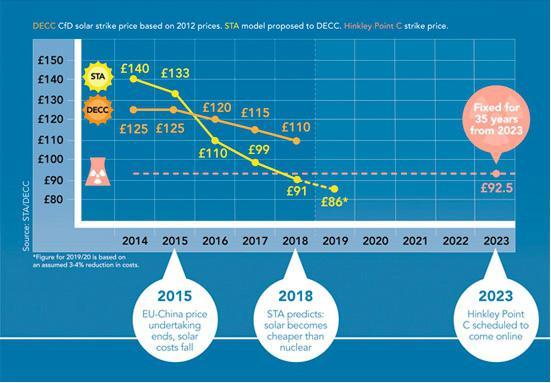 PV also has a consistent record of dramatic cost reductions. Its supply chain is similar to the supply chain of computers; the cost of solar PV modules is 1/100th the cost it was in 1977. 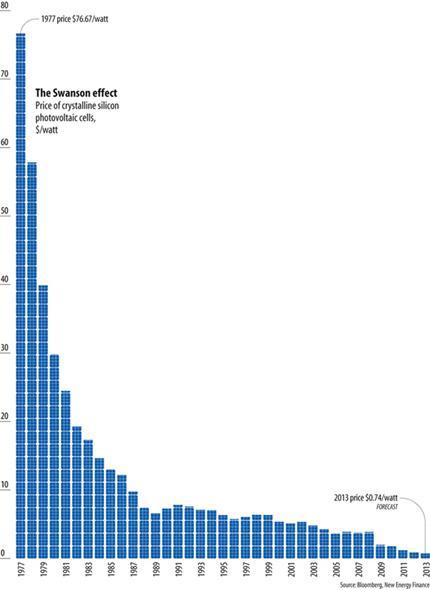 The Solar Trade Association compiled a consensus projection of cost reduction potential through to 2019 for DECC’s Electricity Market Reform strike price consultation back in autumn.

This shows the balance of plant, grid connection, project development, legal and financial costs; all are UK costs making up 54-64% of the cost of a solar farm.

No amount of deployment of solar in China or India is going to reduce these costs. Cost reductions in these areas will come from innovation, investment and competition in the UK.

Both industries talk of creating tens of thousands of jobs. The offshore wind industry suggests that by 2020 it could be supporting over 30,000 full time equivalent UK jobs. In 2011, the STA’s survey showed the UK solar industry was employing 25-30,000 people, and after the crash the industry is steadily rebuilding towards this number. In the USA last year, one in 142 new jobs was in the solar sector.

Both offshore wind and PV have low deployment rates, with offshore wind providing 0.7% of EU generating capacity, and PV around 1.1%; in the UK PV provides around 0.4% of electricity.

Both offshore wind and PV have the potential to make a big dent in the UK’s electricity production with offshore wind estimated to be capable of up to 13%, and PV up to 35%. PV’s potential is really not limited by the space available on domestic and industrial roofs or low grade land. DECC’s own estimates in the 2050 pathways suggest that PV on domestic roofs alone could produce 35% of British electricity requirements. Adding in the potential on industrial roofs and utility scale solar farms focuses the mind on answering the intermittency questions.

Across a portfolio the generation from solar is highly predictable. This graph from the European PV association shows the day ahead forecasts for a portfolio of solar generators. The National Grid needs to be able to view the portfolio of PV to balance the grid effectively. 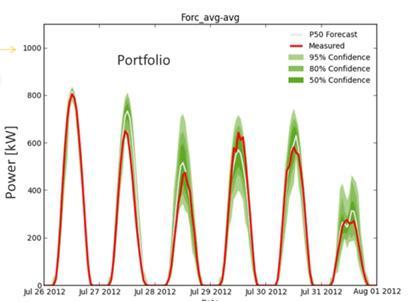 The cost of batteries is falling fast and we expect a step change within the next couple of years. Not from technologies still experimenting in the lab, but from companies with proven technology who have raised capital to build manufacturing facilities. At a target price of £100/kWh these technologies will disrupt balancing markets including gas turbines and pumped storage like Dinorwig in Snowdonia.

This will help with intraday balancing for solar and wind, and initially lop the top off the generation profile for export into the evening peak market. This will enable significantly more solar do be deployed than the National Grid currently things is technically feasible.

Eventually batteries will enable solar generation to match demand as the day’s generation is exported over the whole load profile, with sufficient held in reserve to ride through cloudy days.

To really enable solar to match demand over the whole year, seasonal storage is required. Perhaps with hydrogen production which already uses cheap excess electricity from Norwegian hydro plants. Excess British solar electricity can be sent to Norway through interconnectors for pumped storage or to use in the current hydrogen plants.

Cheap electricity can also be converted to LNG (synthetic methane), for use as a transport fuel or heating homes, with around 60% efficiency. Converting the gas grid to synthetic methane seems more credible to many than replacing millions of domestic gas boilers with electric heat pumps. The UK already has an import, storage and transmission infrastructure for liquid natural gas. Volkswagen is already producing synthetic methane and exporting it into the natural gas grid in Germany.

Even Shell is forecasting that solar will be the dominant generation technology across the world. As solar disrupts the electricity grids in more and more counties, there will be potential for novel storage technologies. If Great Britain had an industrial strategy for solar, as it does for offshore wind, research and development should enable significant cost reductions in the domestic proportion of the costs. We could even create an export industry.

Both offshore wind and solar need to be subject to competition within their sectors to ensure the most costs effective projects are taken forward, and to ensure maximum possible focus on cost reduction at all levels.

But the technologies should compete against each other as well. Otherwise DECC could be increasing consumers electricity bills unnecessarily and shackling British industry with uncompetitive high energy costs for decades to come. 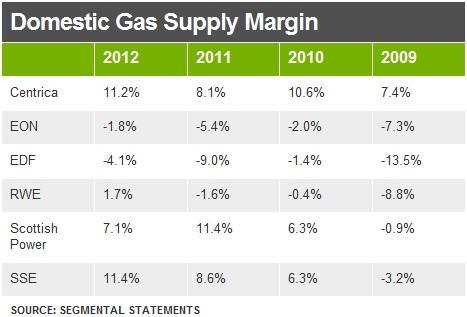