Rates were frozen in October until March 31 2014. Systems under 4kW in size will receive 14.38p per kW/h. The rates for systems over 50kW and less than 250kW will not be changed. 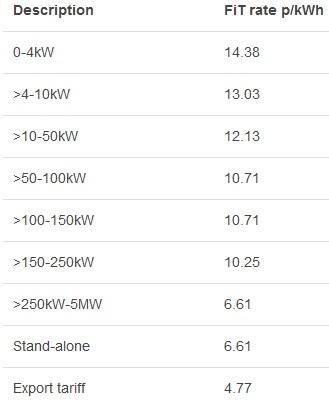 In December last year, climate change minister Greg Barker said he hoped to give the commercial-scale market a boost in 2014.

“There is massive potential to turn our large buildings into power stations,” he told the Solar Trade Association’s Solar Britain event.

“There is a lot more we can do to drive deployment in that all-important mid-scale solar sector. If I see a challenge for 2014, it’s to mobilise that mid-scale solar market – that is where I really what I want to get my teeth into in 2014,” he added.

The full list of figures is available from Ofgem.

“Overall, the degression rates have been broadly in line with expectations and in some cases less severe than anticipated,” said Nick Green, an associate director at Savills Energy, who advises landowners and developers involved with wind farms and other renewable energy infrastructure.

“Renewables projects remain a viable opportunity for landowners and developers looking to invest. With a stable rate of degression, payback time will only increase marginally; we’re talking a few years, rather than decades, with room still for good return on investment,” he added.