Cloudy Britain is becoming Europe’s hottest market in which to build solar parks.

Cheaper equipment costs and steady subsidies are attracting developers of large-scale, ground-mounted projects from nations like Germany and Spain that pioneered solar power on the Continent. 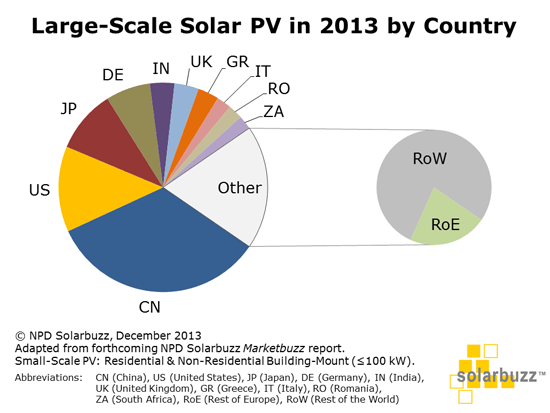 Large-scale solar PhotoVoltaic installations in the UK grew by an incredible 600% during 2013, driving the UK to a record 1.45GW of new solar PV capacity added.

Ground-mounted installations accounted for over 90% of new large-scale solar PV added in the UK in 2013.

Ofgem has confirmed the feed-in tariff (FiT) rates for solar PV technology beginning July 1, 2013. The rates have been reduced by 3.5%, as reported by Renewable Energy Installer with the tariff being reviewed again in October 2013.

If you already have a Solar PV system or are thinking of installing a Solar Panel array, you can now benefit from both free electricity and free hot water all year round.

According to Government’s latest Energy Trends and Quarterly Energy Prices report, the UK has generated a record amount of renewable energy during the first quarter (3 months) of 2012. More than 11% of Britain's electricity generation was attributed to output from solar, wind and renewable heat sources during this period.

The report, which was published yesterday, outlined that output from all renewable sources reached 11.08TWh during the quarter, which is a 39% increase in comparison to the same period of 2010. The updated figures for 2011 also confirm that last year renewable energy output rose 33% to a record 34,410GWh.

"Today's statistics show a clear increase on the first quarter of last year across all renewables - with rises in wind, hydro, solar and bioenergy generation," explained Energy Minister Charles Hendry.

Providing a boost for both the UK economy and the solar industry, a Midlands-based company has today revealed plans to build a 30MW solar photovoltaics manufacturing plant in the UK.

Sunsolar was granted a huge £5 million Government fund backed by Sandwell Council and the Regional Growth Fund, which will be added to a £5 million company investment.

The tariff for a domestic solar PV installation will now fall to 16p/kWh, down from 21p, and will be set to steadily decrease on a three month basis by 3.5 percent thereafter. These digressions are expected to be delayed if the market slows down.

A brand new, revolutionary outdoor gym that harnesses the power generated by those exercising and turns it into electricity has been unveiled in Hull.

The gym uses the power generated by the outdoor cardio equipment and converts it into useable electricity. The renewable energy generated is used to power lighting for the gym, extending the usable hours of the facility.

New research published by the Renewable Energy Association and Innovas reveals that the UK’s 12.5 billion renewables industry supports 110,000 jobs across the supply chain and could support as much as 400,000 jobs by 2020.

The report titled, ‘Renewable Energy: Made in Britain’, will be launched tomorrow on the eve of the Clean Energy Ministerial Summit.

Since the announcement that there are yet more feed-in tariff cuts on the forthcoming months, many solar companies are being approached by farmers who are keen to install 50kW of solar PV on 1/4acre of land or a barn roof before the rates are reduced on July 1.

Energy and Climate Change Minister, Greg Barker, this morning told the BBC Radio 4 Today programme listeners that Britain should increase its carbon emissions target to 30 percent – as long as the rest of Europe follows suit.

In news that will make life a lot easier for many solar PV installers, from April 6 this year, planning permission will no-longer be needed to install solar PV or solar thermal on non-domestic buildings. The new rules will also mean that ground-mounted systems up to 9m2 will be able to go ahead without a planning application.

Half price solar provides similar rates of return as in 2011

The Climate Change and Energy Minister, Greg Barker spoke of his aim to upgrade Britain’s leaky housing stock by using the Coalition’s Green Deal to enhance properties “kerb appeal” by transforming “energy efficiency from the image of dirty, dusty loft insulation to cosy living rooms and beautiful houses. From loft to living room and boring to bling.”

From April 1st all householders requesting to receive Feed-in Tariffs (FiTS) for solar PhotoVoltaic installations will have to make sure that their houses are properly insulated first and that this is reflected on their Energy Performance Certificates (EPC's) with a minimum level D.